Photobombing a Gnome in NOLA 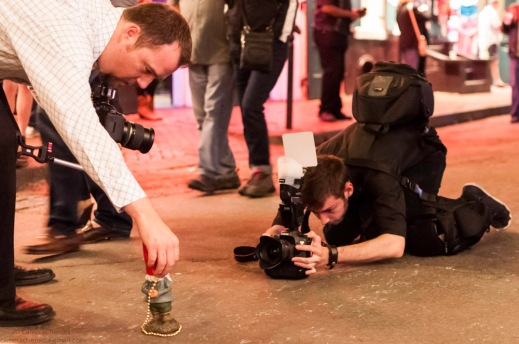 Well, I’m going to start this story out of order. But, honestly, order for these discussions are not all that important. So I was in New Orleans in April for a conference. New Orleans, particularly at night, is a very photogenic city. I made my way down to the French District and Bourbon St. While wandering around wondering how all these old people think its ok to drink like they are back in college, another post to be had later, I saw these guys crouched down in the middle of the street.

Now its pretty obvious by their gear and care in which they were setting up the shot that this was more than a couple of jokers hauling a Gnome around on their travels. So I stop and watch them set up for a while before snapping this shot and moving on.

Biochemist by training and photography enthusiast by nature. Posts are based on my own work to avoid copyright issues. But frequently the inspiration for the post is something I've recently read. In those cases, I link to the original article if I can.
View all posts by CameraChemist »
Next post »

If you were interesting in “Liking” this.

If you were interesting in “Liking” this.